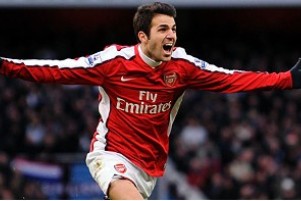 Captain Cesc Fabregas came off the bench to inspire the Gunners to a 3-0 win over Aston Villa which hauls them back into the Premier League title race.

The Spaniard, who had been out with a hamstring problem, netted a superb free-kick on 65 minutes and then scored a fine breakaway goal before being substituted as a precaution.

Abou Diaby netted a third in stoppage time at Emirates Stadium, curling in a low effort from the edge of the area after a powerful run.

Villa – who had already beaten Chelsea, Manchester United and Liverpool this season – looked dangerous on the break but could not make the most of their best spell of pressure midway through the second half.