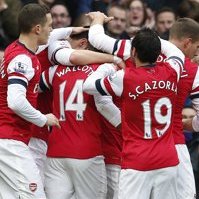 Arsenal made hard work of the visit of Fulham, with Mark Schwarzer saving a late penalty in a 3-3 draw at the Emirates Stadium.

Second half goals from Dimitar Berbatov for Fulham from the penalty spot and Olivier Giroud with a header for the hosts added to four goals in the first period in an entertaining and even contest. Late drama saw Schwarzer save a penalty taken by Mikel Arteta, after Sascha Riether was harshly adjudged to have handled the ball when it was fired at him from close range.

Arsenal took an early lead with Giroud heading past Mark Schwarzer with a bullet header from a corner to make it 1-0 in the 11th minute. It looked like it would be an easy afternoon for Arsene Wenger’s side as they doubled the lead through Lukas Podolski, who made it 2-0 with a simple finish from a clever Arteta pass.

Arsenal should have killed off their opponents with that 2-0 lead but Fulham would not lie down and accept a beating as they fought their way back into the game with two goals in just over ten minutes before half time.

The first was a Berbatov header as the Arsenal defence left the former Spurs man free from a corner and he hit the target on 29 minutes. Then substitute Alex Kacaniklic equalised with a great header from a sweet Berbatov cross, having come off the bench to replace the injured Kieran Richardson.

The second half was as open as the first but Arsenal could not capitalise and the visitors left with a deserved point thanks to Schwarzer’s late heroics.