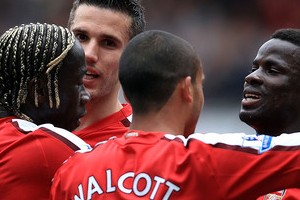 Arsenal secured third place in the Premier League after sweeping aside Europa League finalists Fulham, who had made their expected wholesale changes, at Emirates Stadium.

The Gunners saw their title hopes ended by successive away defeats to Tottenham and then Wigan, but avoided another slip-up which could have allowed their arch rivals to steal the final automatic qualification place in next season’s Champions League.

The Arsenal squad set off on a lap of appreciation after the final whistle of another season which promised so much, yet again failed to deliver a trophy as manager Arsene Wenger was left to reflect on just which summer transfer targets he can bring in to finally turn potential into silverware.

The Fulham fans, meanwhile, will be hoping their amazing European adventure brings a fairytale finish against Atletico Madrid in Hamburg on Wednesday night. Arsenal Legend Thierry Henry Tipped To Be Next Motherwell Manager