Arsenal strolled to an easy 4-1 victory against a terrible Sunderland. 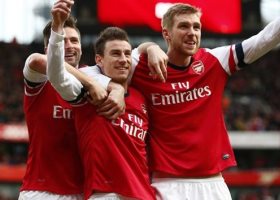 Looking to banish memories of their midweek defeat to Bayern Munich, Arsenal had the easiest of starts, going into the lead after just five minutes. Jack Wilshere received a pass from Tomas Rosicky just inside the box, then slid the ball to Olivier Giroud, who found the corner of the net.

On 31 minutes Arsenal doubled their lead after a risible Sunderland mistake. Santiago Vergini played a woeful back-pass to Vito Mannone which Giroud collected, and then nutmegged the ‘keeper.

With three minutes of the half left, Rosicky made it three, dinking the ball over Mannone to finish a precise four-man passing move.

In the second half, Sunderland started the brightest and Fabio Borini brought a smart save from Wojciech Szczesny from a tight angle. Sunderland then dominated until 57 minutes in, Laurent Koscielny was found unmarked by a Santi Cazorla corner, and he headed past a static Mannone.

Emanuele Giaccherini scored a great goal from the edge of the box, but with nine minutes left it was nothing more than a consolation.