Wigan’s eight-season tenure in the Premier League came to an end as they were hammered at Arsenal, who moved back into the Champions League places.
Lukas Podolski headed the Gunners in front early on before Shaun Maloney’s free-kick levelled the game.
Realistically Wigan had to win to keep their survival hopes alive.
But Theo Walcott’s low strike, a lobbed second from Podolski and Aaron Ramsey’s angled strike ensured Wigan 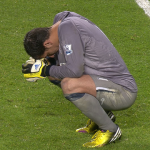 will be playing in the Championship next term.