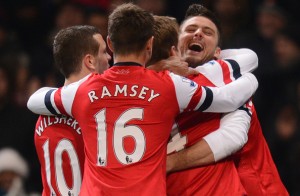 Arsene Wenger’s side had been subjected to scathing criticism from fans and pundits after successive defeats against Manchester City and Chelsea seriously damaged their bid to finish in the Premier League’s top four.

Wenger was reported to have held crisis talks with his players this week and the Gunners looked set to hit a new low when Jack Collison gave West Ham a shock first-half lead at the Emirates Stadium.

But Arsenal bounced back in emphatic fashion, equalising through Lukas Podolski and then taking the points after Giroud sparked an astonishing spree of four goals in 10 second-half minutes, with Santi Cazorla and Theo Walcott on the scoresheet before Giroud completed the rout.

Arsenal remain in sixth place but their first league win in four matches moves them within four points of fourth-placed Tottenham in the race to qualify for the Champions League.

It was a remarkable turnaround after Wenger’s team were initially caught cold in the freezing conditions.