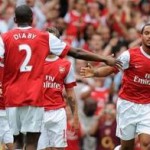 Theo Walcott scored a thrilling hat-trick as Arsenal brought ten-man Blackpool down to earth with a 6-0 thrashing at the Emirates Stadium.

Ian Holloway’s team beat Wigan 4-0 on their Premier League debut, but were given a harsh lesson in the realities of top-flight football as Arsenal ran riot to ensure the promoted side left North London with negative goal difference.
Reduced in number by Ian Evatt’s red card for a professional foul on Marouane Chamakh, Blackpool were powerless to resist an attacking onslaught led by the brilliant Walcott. His efforts were supplemented by an Andrei Arshavin penalty, an Abou Diaby finish and a Chamakh header.
It could have been worse for Blackpool; Chamakh produced a miss bad enough to guarantee lifetime inclusion in those Christmas bloopers DVDs.