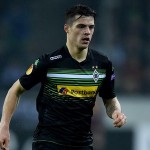 Gladbach chief Max Eberl has announced Xhaka will be sold this summer after he turned down a new contract offer.

“He did not renew his contract with us a couple of weeks ago, so he will change teams for about €25 million,” said Eberl.

Xhaka has been linked with Arsenal and Inter Milan.

However, Calciomercato.com says Milan are also keen, particularly with Nigel de Jong, Sulley Muntari and Michael Essien leaving at the end of the season.