Reports are out claiming that Premier League clubs are monitoring Asier Illarramendi’s situation at Real Madrid. 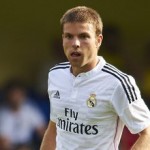 The Daily Express claims that Arsenal and Liverpool are ready to battle it out for Illarramendi.

The 24-year-old arrived at the Bernabeu for £25million in 2013 but has struggled to nail down a regular spot under Carlo Ancelotti.

It is reported he could be up for grabs on loan in January, with AC Milan tipped to make a move for the Spaniard, along with the Premier League pair.

Arsene Wenger Ready To Send Ryo Miyaichi Out On Loan