It has been reported that Alex Oxlade-Chamberlain was delighted for Danny Welbeck over his hat-trick in Arsenal’s 4-1 rout of Champions League opponents Galatasaray. 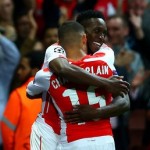 The former Manchester United striker has been criticised for his goal return in the past but Oxlade-Chamberlain believes Wednesday’s performance is a sign of things to come from the 23-year-old.

“It’s nice to see Welbz do so well,” Oxlade-Chamberlain said.

“When he came to this club, I knew that the way we play football combined with his pace and his intelligent runs meant we’d find him a lot.

“The boys did that tonight and I was really happy to assist him for his last goal. I think tonight was all about him. He did really well for us on and off the ball.”

Newcastle Wants Arsenal To Get Serious About Yohan Cabaye