It has been revealed that Arsenal attacker Theo Walcott can’t see England playing for a draw against World Cup qualifying opponents Ukraine. 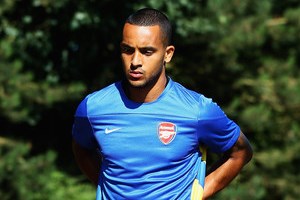 The Three Lions would remain top of their group table if they draw in Kiev.

However Walcott thinks holding out for a point in the Olympic Stadium would be the wrong thing to do.

“We always go in to games trying to win them. We don’t want to go out there and try to get a draw,” the Arsenal winger said.

“That’s when we could be caught on the break.

“We have a lot of pace in this team. They will have to come at us and I think that could work in our favour.”