It has been reported that Arsenal have struck terms with Newcastle United for fullback Mathieu Debuchy. 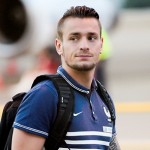 L’Equipe claims that Arsenal will pay €11 million for the France international, who is in London undergoing a medical.

Arsenal boss Arsene Wenger has moved for Debuchy as a direct replacement for Bacary Sagna, who signed for Manchester City last month.

There has been talk of Joel Campbell and Carl Jenkinson moving to Newcastle as part of the deal. However, French reports insist it will be a straight cash transfer.