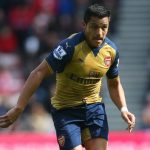 The Gunners were held to a goalless draw by Sunderland on Sunday and once again find themselves fighting for a top four spot.

Redknapp claims that Arsenal fans have been brainwashed into believing that a Champions League is an achievement for the club.

“It’s like groundhog day,” he said on Sky after the game at Stadium of Light.

“We’ve seen so many games like that from Arsenal, where they seem to run out of ideas, look like they’re waiting for something to happen. When Alexis Sanchez isn’t on form, you wonder who’s going to score.

“It looks like they’re going to limp into the top four again and that, for me, is boring. They deserve better than that.

“I know you can say Chelsea and Man Utd are still behind them but this was their big chance and unfortunately, they’ve blown it.”