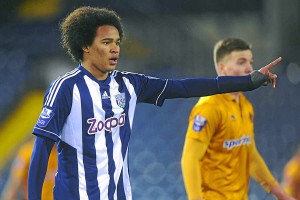 Arsenal is primed for a major power struggle with Chelsea for West Brom wonder kid Isaiah Brown.
The Arsenal boss has been tracking Brown, 16, and is ready to test Albion’s resolve with a £1million bid in the summer.

But Chelsea are set to flex their muscles after watching Brown in action for West Brom’s Under-21s and offer £2m.

The Blues are hoping their relationship with Baggies boss Steve Clarke — plus the success of their loan arrangement with Romelu Lukaku this season — will help swing a deal in their favour.

Wenger has been given glowing reports on the England Under-17 striker by Arsenal’s head of development and former Albion coach Terry Burton.

Brown recorded times quick enough to qualify for last year’s English Schools Championship as a sprinter.
He was also part of England’s Under-17s squad last summer for the Nordic Tournament in the Faroe Islands.
He is currently on a two-year scholarship deal with Albion and Clarke hopes to persuade him to sign professional forms next year when he turns 17.