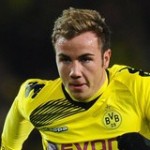 Borussia Dortmund’s Mario Gotze has renewed tensions between Arsenal and City a the talented 20-year-old Germany international is a transfer target for both clubs.

Reports in Germany claim Begiristain flew out to Dortmund to watch the German club’s fixture against Shakhtar Donetsk in March and had a conversation with Gotze’s agent, Volker Struth, regarding a potential deal.

Roberto Mancini is already targeting several big-name signings ahead of the summer transfer window after seeing his side fall 12 points behind Manchester United in the title race this season.

Gotze also remains on Arsenal’s radar and although Arsene Wenger’s side would be reluctant to meet the Germany international’s €40 million [£34m] release clause, a bid of around £25m would be considered by the Premier League club.

Arsenal failed with a bid for Gotze in 2011, while the player’s agent stated that the midfielder would remain with Dortmund for a further two years before considering a move elsewhere.