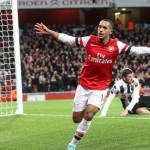 Arsenal will play Indonesia in a pre-season friendly in July, football chiefs said on Wednesday, as the Premier League giants look to cash in on their huge fan base in the Southeast Asian nation.

The Gunners’ exhibition match on July 14 against the Indonesian national team marks the club’s first trip to Indonesia since 1983 and their third Asian tour in the past three years, the club said on its website.

“Everyone at Arsenal, the players, (manager) Arsene Wenger and all the backroom staff are looking forward to coming to Indonesia after 30 years away,” Arsenal’s chief commercial officer Tom Fox said.

“We know that Arsenal enjoys fantastic support in Indonesia, with over 1.3 million fans connected to us by Facebook alone, and we look forward to giving our loyal fans the chance to see their heroes in action.”

Indonesian Football Association general secretary Halim Mahfudz said the visit would be a “good opportunity for Indonesian players to learn from Arsenal”.

“Besides Arsenal, we’re also in negotiations with Juventus and Liverpool to visit Indonesia this year,” he added.

Arsenal run several football schools in the country, as do AC Milan and Liverpool.

Top European clubs have increasingly courted Asia with high-profile exhibition tours, keen to nurture a fan base and long-term market for shirts, memorabilia, tickets and in-house TV channels — and to help attract sponsors.