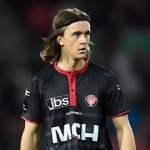 Reports are out claiming that Arsenal have announced the departure of Kristoffer Olsson to FC Midtjylland.

A Swedish youth international, Olsson made one first-team appearance for the Gunners, when he netted a penalty in the shoot-out win over West Bromwich Albion in the League Cup last season.

Olsson also captained Arsenal’s under-19s to the quarter-finals of the UEFA Youth League in 2013/14.

The 19-year-old midfielder featured six times in the league for the Danish club during his loan spell.