Bayern Munich forward Thomas Muller has declared that Arsenal should consider themselves under “enormous pressure” ahead of tomorrow’s Champions League clash at the Emirates Stadium. 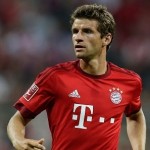 Arsene Wenger’s side are bottom of Group F after shock defeats to Dinamo Zagreb and Olympiacos and must aim for a positive result against the 2013 European champions to keep their hopes of reaching the knockout rounds alive.

The German international says the pressure is firmly on the home side after Bayern won their opening two games but denied any suggestion that the Bundesliga leaders can expect a comfortable win.

“Arsenal are under enormous pressure ahead of the game but you can’t talk about a clear favourite. It’s certainly a game I’m looking forward to,” he said.

“We won the last two games here, and I scored in both games. Tomorrow I will go on the pitch and remember good memories of playing here. We’re all excited, but it’ll be no walk in the park!

“Both teams play an attacking game. In the end I hope it’s a good game, but a better one for us.” Cesc Fabregas : Everybody At Arsenal Happy For Me