Interesting transfer news are out claiming that Barcelona attacker Alexis Sanchez favours a move to Arsenal. 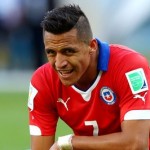 The Daily Express reported that Arsenal boss Arsene Wenger is keen on the Chile international.

And it seems that the feeling is mutual, with the Gunners the 25-year-old’s preferred destination according to reports in Spain.

It is thought that Wenger could be preparing to make a £28m bid for the Sanchez in the coming days following Chile’s elimination from the World Cup at the hands of Brazil.