Reports are out claiming that Lukas Podolski has cast doubt over his future at Arsenal. 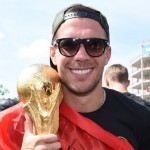 It’s reported Podolski hinted he was set to move to Sevilla after his summer break.

The German international posted a tweet, declaring: “Road to Sevilla FC”, before quickly deleting it.

The 29 year old has discussed openly his frustration over failing to nail down an automatic starting place in manager Arsene Wenger’s plans.

The former Bayern Munich star has also been linked with a return to FC Cologne.