It has been reported that Lukas Podolski wants showdown talks with Arsenal boss Arsene Wenger. 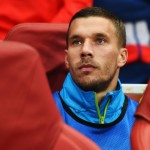 The People reported that the 29 year old has demanded showdown talks with Wenger over his Arsenal future.

The World Cup-winning Germany forward has yet to start a Premier League game this season, but Gunners boss Wenger has declared his wish to keep the former Bayern Munich star at the Emirates.

However Podolski said he will leave in January unless he gets more first-team action.

“I don’t like sitting on the bench. I am 29 and I want to play. I will speak with the manager and then see what happens,” he said.