Interesting transfer news are out claiming that Crystal Palace have been turned down by Arsenal attacker Serge Gnabry. 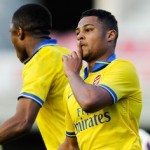 The Croydon Advertiser revealed that Gnabry is understood to have rejected a move to Crystal Palace on Tuesday.

The Germany youth international has been linked with Southampton, Newcastle, Sunderland and even Borussia Dortmund this summer.

Tony Pulis had reportedly taken an interest in the attacking midfielder as the boss looks to bolster his squad with signing at least three more players, including a centre-back before the season starts.

Arsenal Set To Go All Out To Sign Stephane Sessegnon Arsenal’s Koscielny Admits Success With Mertesacker Due To Friendship