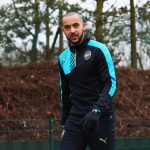 Reports are out claiming that Arsenal attacker Theo Walcott is a target for Manchester City.

The England international is believed to be liked by Pep Guardiola and he has reportedly asked City to monitor his movements over the next couple of months.

Walcott is facing a crossroads in his career and is linked with a move away from the Emirates after being in and out of Arsene Wenger’s team.

He has not started a league match since the end of February.