It has been reported that Tottenham are watching FC Basel defender Fabian Schar during Switzerland’s World Cup run. 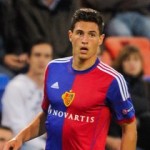 The Daily Star claims that new Spurs boss Mauricio Pochettino is weighing up a move for the £9m-rated Basel centre-back who is currently on international duty in Brazil.

Pochettino wants to assess Schar, 22, during the World Cup squad before firming up his interest.

His hopes were scuppered when Schar – also a target for Arsenal and Barcelona – was surprisingly left out of Switzerland’s 2-1 comeback win over Ecuador on Sunday.

But Schar could get the chance to impress the Argentinian if he is recalled for Switzerland’s second group game against France today.