It has been reported that Barcelona are making a move for PSG attacker Ezequiel Lavezzi. 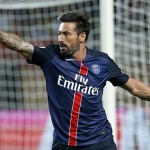 Off contract in June, Lavezzi is ready to leave Paris in 2016 – perhaps as early as January.

Sport claims that Barca see the Argentine as ideal cover for their star trio of Lionel Messi, Luis Suarez and Neymar.

Robert Fernandez, Barca’s sports director, has made personal scouting checks on Lavezzi and is ready to make a €5 million winter market offer to PSG for the striker.

Messi and fellow Argentina teammate Javier Mascherano are also working on Lavezzi to convince him about moving to Spain.

The final say, however, will be left to coach Luis Enrique, who is sifting through several options to solve his striker transfer dilemma.

Ezequiel Lavezzi is also linked with a move to Arsenal. Arsenal, Liverpool To Do Battle For Reading Fullback Jordan Obita