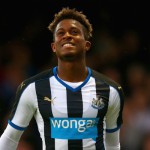 TMW reported that the Gunners are joined by Juventus and AC Milan in allegedly tracking the progress of the 20-year-old.

After bursting onto the scene last campaign, Aarons has been limited to just eight senior appearances this season due to injuries.

But he was back in action with the first-team and scored against Lillestrom during a warm-weather training camp friendly match in La Manga, Spain.