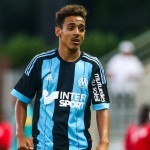 It has been revealed that Olympique Marseille youngster Bilal Boutobba is wanted by Arsenal.

According to reports from Estadio Deportivo, Arsenal are interested in signing Boutobba.

The 17-year-old has rejected a new contract with the French club and Arsene Wenger is said to be a huge fan of the midfielder.

However, the Gunners will face competition for his signature with Sevilla also monitoring his situation.