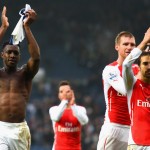 The Daily Mail has reported that Arsenal have become the first Premier League club to reach five million followers on Twitter.

The north London club said in a news release on Monday that they had consolidated their position as the third most followed team on the social network behind Real Madrid and Barcelona.

“We are delighted to have engaged so many passionate Arsenal fans around the world,’ said Richard Clarke, managing editor of the club’s media group.

“The interest continues to grow and we constantly evolve our approach to keep our fans engaged with what is happening across every aspect of the club.”

The Gunners now around 0.6 million more followers than London rivals Chelsea, who currently stand at £4.85m.

Arsene Wenger Open To Writing His Own Book In The Future