It has been reported that Bayern Munich captain Philipp Lahm is looking forward to facing Champions League opponents Arsenal. 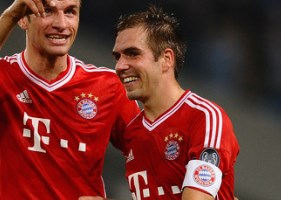 The German international told the Guardian : “The biggest danger for us, right now, is facing Arsenal in the last 16. It’s a tough draw,”.

“A lot can happen in those two games. It’ll be two teams that are very good tactically and technically. I’m really looking forward to that game. I think every football fan is.

“They’re fighting for the championship, that’s not a coincidence: I believe they have developed as a team. They’ve become much stronger, the squad is more balanced. And they still play the way Arsenal always play. They want to have the ball, they like playing it short, and they have outstanding individuals.” Wenger Planning Move for Etienne Capoue in the Summer

Sagna : It Was Difficult To Defend Against Messi