Good news for all Arsenal fans as striker Olivier Giroud is available for this weekend’s Premier League meeting with Manchester United. 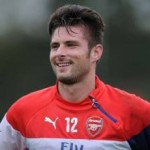 The 28 year old France international had been ruled out until the new year with a broken leg suffered against Everton in August, but has returned sooner than expected.

“He is three or four weeks ahead of schedule,” boss Arsene Wenger said.

“Originally we planned to have him back for competition at the beginning of next year. So he’s one month ahead.”