It has been reported that Arsenal boss Arsene Wenger has admitted his great admiration for Juventus midfielder Arturo Vidal. 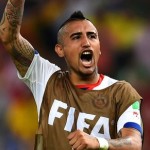 The French tactician has hinted that Arsenal will try and beat Manchester United to the Chilean midfielder.

Wenger is currently in Brazil as a pundit for French television and said of the Chilean: “Vidal is one of the best midfielders in the world.

“He has everything. Incredible stamina, perfect timing. He’s a marathon athlete who plays football.”