It has been reported that Arsenal boss Arsene Wenger admits concern over Alexis Sanchez’s fitness. 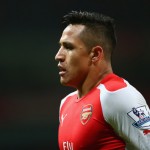 The French tactician admits his £30million man is in the “red zone”.

“He will not go to Turkey (Galatasaray),” Wenger confirmed.

“He will need a week’s break, I did it with many players before who were playing every game.

“I did it with (Thierry) Henry, with (Robin) Van Persie and it always helped them to get through without injury.

“Sanchez is in the red zone, you can see when he plays, but he can dig deep.

“He played his 27th game on Wednesday (against Southampton) since the start of the season. Unfortunately you never know how far you can push it.

“We are not scientific enough to predict that completely but he recovers very quickly.”