It has been reported that Arsenal boss Arsene Wenger admits Mathieu Debuchy is facing three months out. 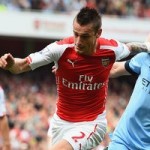 The French tactician has confirmed Debuchy will need ankle surgery.

“He has an exploration of his ankle tonight and they go in and look how the ligament is damaged, and after that we know if he does need surgery.

“If he doesn’t, it’ll be six weeks, if he does need surgery it’ll be three months. At the moment we don’t know.”