It has been reported that Arsenal boss Arsene Wenger is upbeat over Olivier Giroud’s return from injury. 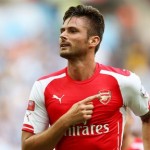 The original prognosis was that the French international would be out for four months after he sustained a foot injury in the Gunners’ 2-2 draw against Everton.

However, Wenger believes Giroud has responded well to surgery and could return before the end of the year.

“I believe he is ahead of schedule in terms of rehabilitation. The operation went perfectly.”