Arsenal boss Arsene Wenger has admitted that he is a big fan of Chelsea striker Diego Costa. 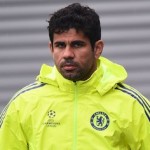 Indeed, the French tactician has revealed he wanted to sign Costa this summer.

When asked whether he wanted to bring the on-fire frontman to the Emirates, he said: “Yes, but that was a deal that was struck early.

“Costa has done fantastically well, I must say. I am impressed by how well he has done.

“He has all the aspects of a striker that I like. He is focused, always determined and ready for a fight.

“He has players like Cesc [Fabregas] who can always find him. He is a very efficient player, the timing of his runs and killing determination. You feel this guy is a killer and he has that in him.”