Reports are out claiming that Arsenal boss Arsene Wenger feels Theo Walcott is still two months away from returning to his very best. 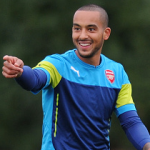 The 25-year-old England international attacker is in line to make his first start since suffering a cruciate knee ligament injury on January 4 when the Gunners travel to Swansea City on Sunday afternoon.

“It takes two months,” he said when asked how long it will take Walcott to get back to his best.

“Once you’re back in full training, you count two months. Of course, people think you’re back and you play but it’s not like that. Ten months is a long time in top-level football.

“(You lose) the sharpness, the speed. At the top level, it’s a fraction of a second that makes the decisions. And to find the confidence to get away from people.

“You’re nearly there but you’re not there and for a while you think, ‘will that ever come back?’ And suddenly yes, it’s there again. But it takes time to get that fraction of pace.

“You need to go back into contact. He will go with England and get what he needs to. He will get competitive training every day and get back into games.”