Arsenal boss Arsene Wenger believes Tottenham will never maximise their potential on or off the field until they have moved to a new stadium. 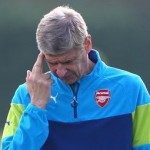 Spurs are pushing ahead with proposals to redevelop land around White Hart Lane to accommodate a new 56,250-capacity venue, but could be set for a season of ground-sharing rather than being able to move for the 2017-18 campaign as planned.

Wenger said: “You cannot be in a business where you turn down 15,000 or 20,000 people every week. If your competitors have more financial power than you, at some stage you have to make a decision.

“It looks like everybody makes this decision now, because when you look at Liverpool, Everton, (they) want to increase their capacity. West Ham go to a bigger stadium next season so if you stay in a smaller capacity, it is even more difficult.”

Wenger added: “We built our stadium at a price that you couldn’t afford it anymore and by subsidising it with our own resources, that is much more difficult today.”

Tottenham, Man City To Do Battle For Arsenal’s Mikel Arteta