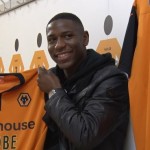 It has been reported that Arsenal boss Arsene Wenger is backing Benik Afobe to be a success with Wolves.

Afobe left Arsenal this week for Wolves after a hugely-impressive loan spell with MK Dons. Afobe scored 19 goals in 30 appearances for the League One club and will now try his luck in the Championship.

“Benik has made a name through his performances and he is now rewarded with a move to Wolves,” said Wenger.

“I believe that it’s very interesting for him as well. He deserves it. We like him very much here and I’m happy that he got the chance.”