Reports are out claiming that Arsenal boss Arsene Wenger has confirmed Francis Coquelin has been offered a new deal. 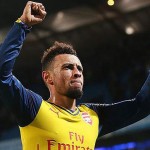 The 23-year-old French midfielder has enjoyed a remarkable turnaround in fortune having spent a month on loan at Championship side Charlton before earning a recall and forcing his way into the Gunners’ first team.

Wenger said: “We have offered him a new deal. I am confident that it will be done.

“He is a very young player. You look just at what happens on the pitch. Win the ball and make a good pass. In his position that is important.

“I saw that he made huge improvements in training and I explained to him that for me to give him a potential chance, he needed match practice. I could not give him that, I could give him that only if he had played somewhere else before. He took the challenge, he came back and since I have played him he is doing well.”