It has been reported that Arsenal boss Arsene Wenger is convinced about the quality of fullback Kieran Gibbs. 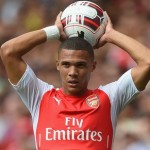 The Frenchman revealed that he only allowed Gael Clichy to leave for Manchester City in 2011 to give Gibbs a chance.

“For a long time there was no discussion, it was Ashley Cole for England. Now it’s a bit more open,” explained Wenger. “Gibbs has such great potential, if he lets it go.”

Wenger nurtured the teenage Cole from a forward into one of the world’s best full backs and similarly moved Gibbs back when he joined the club as a winger aged 16.

Asked if Gibbs, now 25, can reach Cole’s level, Wenger replied: “Yes, it’s a good example to follow. When it mattered and when you had to be there, he was always there.”