Reports are out claiming that a long term injury to striker Danny Welbeck leaves Olivier Giroud as Arsenal’s only recognised striker fit for selection, with Theo Walcott and Alexis Sanchez having been mainly used as wide players. 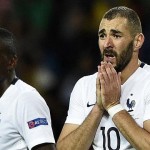 The Gunners knew the extent of Welbeck’s problem before the transfer window closed on Tuesday, 1 September but did not reinforce their attack.

“The solutions we had were not convincing at all,” boss Arsene Wenger explained.

“I have made more than 300 transfers and every time it’s a decision to make.

“You either find someone who strengthens your squad or not. Whether we have players injured or not doesn’t change the problem, You also have to be brave enough to say no.” Arsene Wenger Delighted With The Improvement Of Carl Jenkinson