It has been reported that Arsenal boss Arsene Wenger is keen to ease the expectations around Aaron Ramsey. 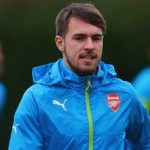 The 23 year old Wales international hit 16 goals last season during a memorable campaign, and has three to his name so far this term.

“A midfielder is a player who defends well, attacks well and keeps his priorities right,” Wenger said.

“He’s running after consistency. He’s one of the players who has been very efficient last season.

“Since the start of the season, he has not had a consistent run. He’s now coming back – he has been sick as well.”