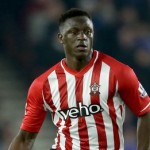 And Wenger is also a fan of Wanyama.

The powerhouse Kenyan was signed from Celtic for £12.5m in the summer of 2013 and he would add the muscle that Arsenal appear to lack.