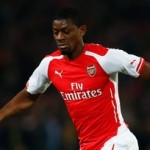 It has been reported that Arsenal boss Arsene Wenger was happy with Abou Diaby’s performance in their Capital One Cup defeat to Southampton.

It was the French midfielder’s latest attempt at a comeback from long-term injury.

Wenger said: “It was difficult for him but he got 60 minutes and he was not injured. At some stage he has to play. He had 90 minutes [for the under-21s] at Villa last week. He played 60 minutes tonight. He was not bad, he was acceptable as a performance but he tired after an hour.”

Wenger admits he wants Diaby to change his game into a defensive midfielder.

“I try to transform it, yes because I feel because he was injured for a long time and he has the physical potential to win the challenges, to face the game will be easier for him than to play with his back to goal with the injuries he had. I tried to develop him in a deeper role, I think he can do it. He can be very interesting because he has all the attributes to do it. After, he must love it as well because he’s more of an offensive-minded player.”