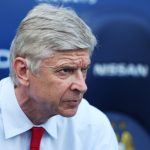 Reports are out claiming that Arsenal boss Arsene Wenger has made a killing from a collapsed sports company.

The Sun says Wenger has cashed in for £3.5million after his sports company shut down.

The Arsenal boss is believed to have been receiving payments from LA Promotions LTD since the company went into voluntary liquidation in December 2014.

Accounts reveal that Wenger took home in excess of £2million from the company.