Reports are out claiming that Arsenal manager Arsene Wenger has revealed the reasons behind Carl Jenkinson’s loan to West Ham United. 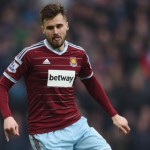 The 23-year-old defender will spend a second season-long loan with the Hammers after impressing at Upton Park last term.

Jenkinson is seen as a player for the future at Arsenal but Wenger feels he needs another season of regular game time to help force his way into the Gunners line-up.

“We have the emergence of Hector Bellerin, we have (Mathieu) Debuchy, we have (Calum) Chambers,” said Wenger.

“We are a bit congested in an area where you do not find many right-backs all over the world.

“He will continue his development with West Ham. I found that all are winners there – West Ham and Arsenal and Jenkinson.”