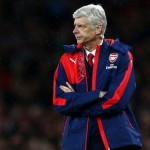 Reports are out claiming that Arsenal manager Arsene Wenger shed light on the absence of centre-backs Laurent Koscielny and Per Mertesacker following the game against Liverpool.

Both players were last-minute omissions before the kick-off against the Reds on Monday night which ended in a 0-0 draw.

Wenger explained in his post-match conference: “Mertesacker is sick. How long will that sickness take? I don’t know.

“Koscielny has a back problem. Having said that, our two centre backs played well in the second half.” Wenger Must Be Sacked If Arsenal Do Not Win Title – Merson