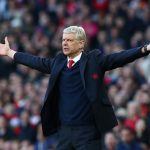 Reports are out claiming that Arsene Wenger is a genuine target for the English Football Association.

Reports in the British press suggest that the FA are considering an eventual move for the Arsenal manager in a bid to brighten the long-term future of the national team.

According to The Guardian’s Daniel Taylor, the ‘FA have confirmed Arsene Wenger will feature in their longer-term thinking’ while the Daily Mail is indicating that the FA ‘are prepared to wait 12 months and go foreign in their search for Roy Hodgson’s successor as England manager’.

Wenger has been in charge of the Gunners since 1996 but his contract expires next summer and he is seen as the perfect candidate to lead the Three Lions towards World Cup glory by 2022.

Roy Hodgson’s resignation in the wake of Monday night’s embarrassing Euro2016 defeat to Iceland has the FA immediately eyeing a replacement which at this early stage looks likely to be U21 head coach Gareth Southgate.

However, FA chief executive Martin Glenn has revealed that a foreigner will be considered for the England post which makes Wenger a genuine contender for the job due to his knowledge of the English game and extensive experience with a big club.