It has been reported that Arsenal boss Arsene Wenger was excited by Calum Chambers’ performance in their 3-0 Community Shield rout of Manchester City. 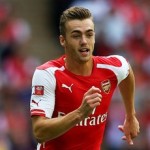 The Frenchman was quick to heap praise on new signing Chambers though after the full-back slotted in at the heart of the Arsenal defence and kept Edin Dzeko and Stevan Jovetic quiet.

The 64 year old said of the ex-Southampton man: “For a 19 year-old, he had an outstanding performance today. He was very impressive.

“I saw him there [at centre-back] when I bought him. He was outstanding.” Arsenal Must Play The Perfect Game Against Monaco – Robert Pires