Reports are out claiming that Arsenal manager Arsene Wenger was full of praise for his key striker after Wednesday night’s 2-1 win over QPR. 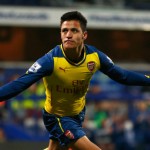 Olivier Giroud and Alexis Sanchez were both on target for the Gunners as they defeated the R’s at Loftus Road and Wenger believes the latter has a great mentality after finishing from an acute angle after not tallying for seven games prior.

“It’s good because when you don’t score for seven or eight games it is on your mind even if you say it’s not,” said Wenger of the Chile international.

“But he took his chance well and he’s tricky and has a short back-lift and scored a good goal.

“He never gives up and that’s the strength of a good striker as well.

“He’s resilient and he showed that he has the mental strength to respond.”

Sanchez, who joined Arsenal from Barcelona in the summer, now has 13 goals for the Gunners in his debut Premier League campaign. Hector Bellerin Welcomes Instant Chance For Arsenal To Bounce Back